'Don't get on the plane': The harrowing phone call that changed Jess's life

Two days before Jess Braude was due to fly back to Singapore her phone rang. It was her doctor telling her not to get on the plane.

Braude had been in Sydney for less than a week before the phone call. It was July 2017 and she had travelled home to spend her 30th birthday with her family. Yet, a last-minute medical check-up would prove life-changing.

"It probably wasn't my greatest idea, but we had the MRI the day before my birthday," Braude tells 9Honey with a chuckle.

"So, it was on July 4 and my sister went first. She went and had it, came out and no one said anything. Then I went and had mine, came out, and then the lady said, 'Oh, don't be surprised if the doctor rings you and you might need to come back for another test'."

The 34-year-old speaks openly about the lead up to her cancer diagnosis, an aggressive form of Triple Negative Breast Cancer, to be exact. 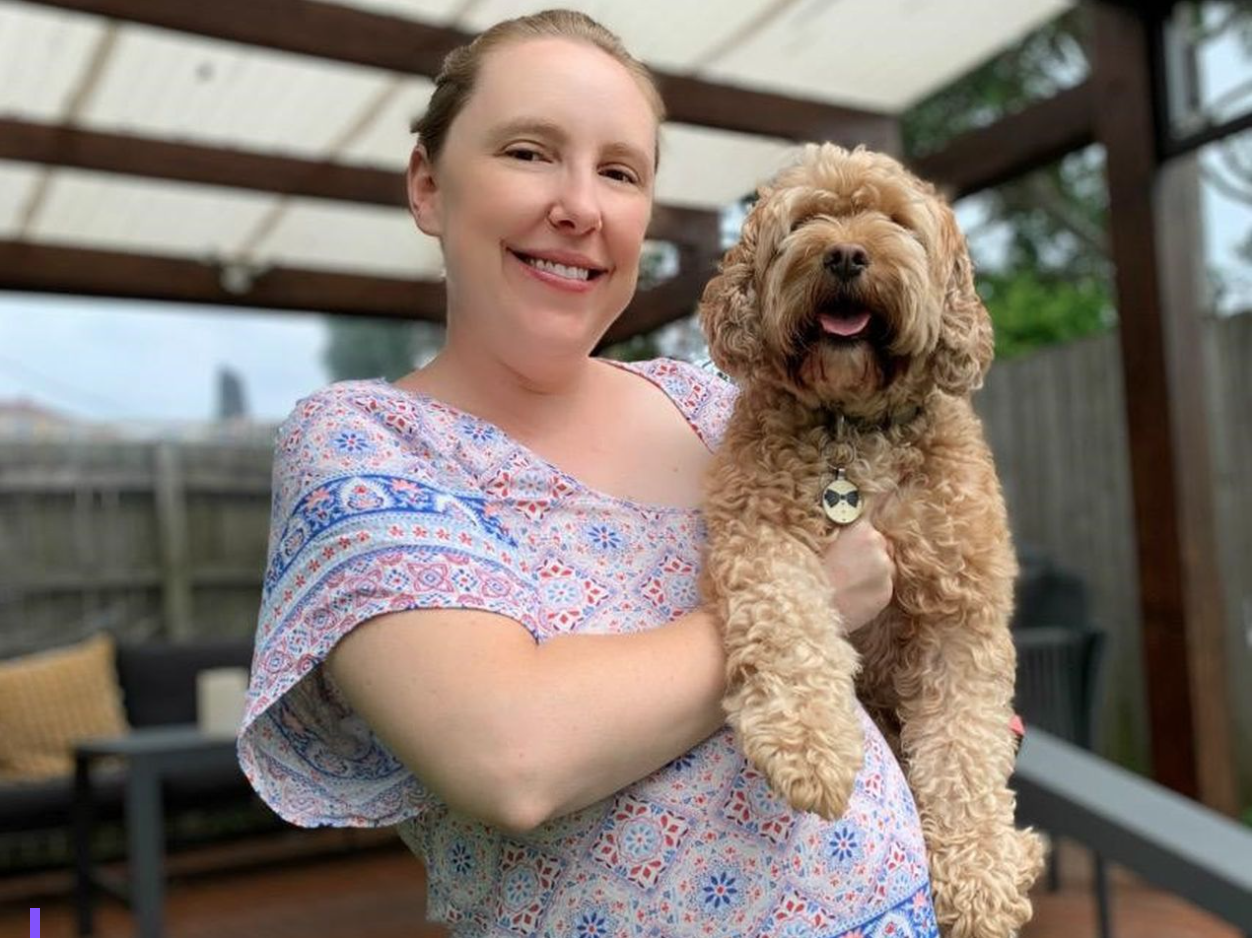 Jess Braude is expecting her first child in May 2021. (Supplied)

She and her sister have known since they were teenagers there was a chance they could one day receive a cancer diagnosis.

The women have the BRCA gene, which was passed on by their father's side of the family. Their uncle, who's a doctor, heard about the genetic testing from a colleague.

BRCA1 and BRCA2 are two different genes that have been found to impact a person's chances of developing breast cancer. It does not necessarily mean cancer does develop.

Sadly, Braude's paternal grandmother died of breast cancer when she was just 42.

"She was born in Austria and is from a Jewish background, so when we heard about the BRCA testing we knew that was a risk factor being from an Ashkenazi Jew background," Braude says.

"So, that in combination with her being so young, and having such an aggressive form of breast cancer, made us think we should get tested."

Braude recalls running through a questionnaire with her GP about her chances of having cancer. Her survey results revealed she would not qualify for the genetic test.

"I moved to Singapore for my husband's work, because I thought 'I'm just going to live my life'."

Both Braude and her sister's test came back positive for the gene. They took solace in the fact they could share their six-monthly scans — MRIs, ultrasound mammograms and ovarian cancer screenings — together.

They were both referred to a breast and gynaecologist specialist.

"We found out we had the gene in October 2016, and then in December of that year we had our first ultrasound mammogram and that was fine," Braude says.

"I moved to Singapore for my husband's work because I thought 'this is not such a big deal and I'm just going to live my life'."

"I was so sure, from the data and what I was told, that it was not going to affect me."

She says all the paperwork she had been given about the gene and her chances showed she had years before she had to even think about a cancer diagnosis.

"[There's] a graph when you've got the breast cancer gene, and literally it's flat and then you get to 60 and that's when it goes up," she says.

"The messaging was like 'you don't need to worry about this until you're older'. So, we weren't worried about getting cancer. We felt lucky that we knew and we had the knowledge."

Braude says since learning about having the gene she had formulated a plan for her future, particularly around having children. 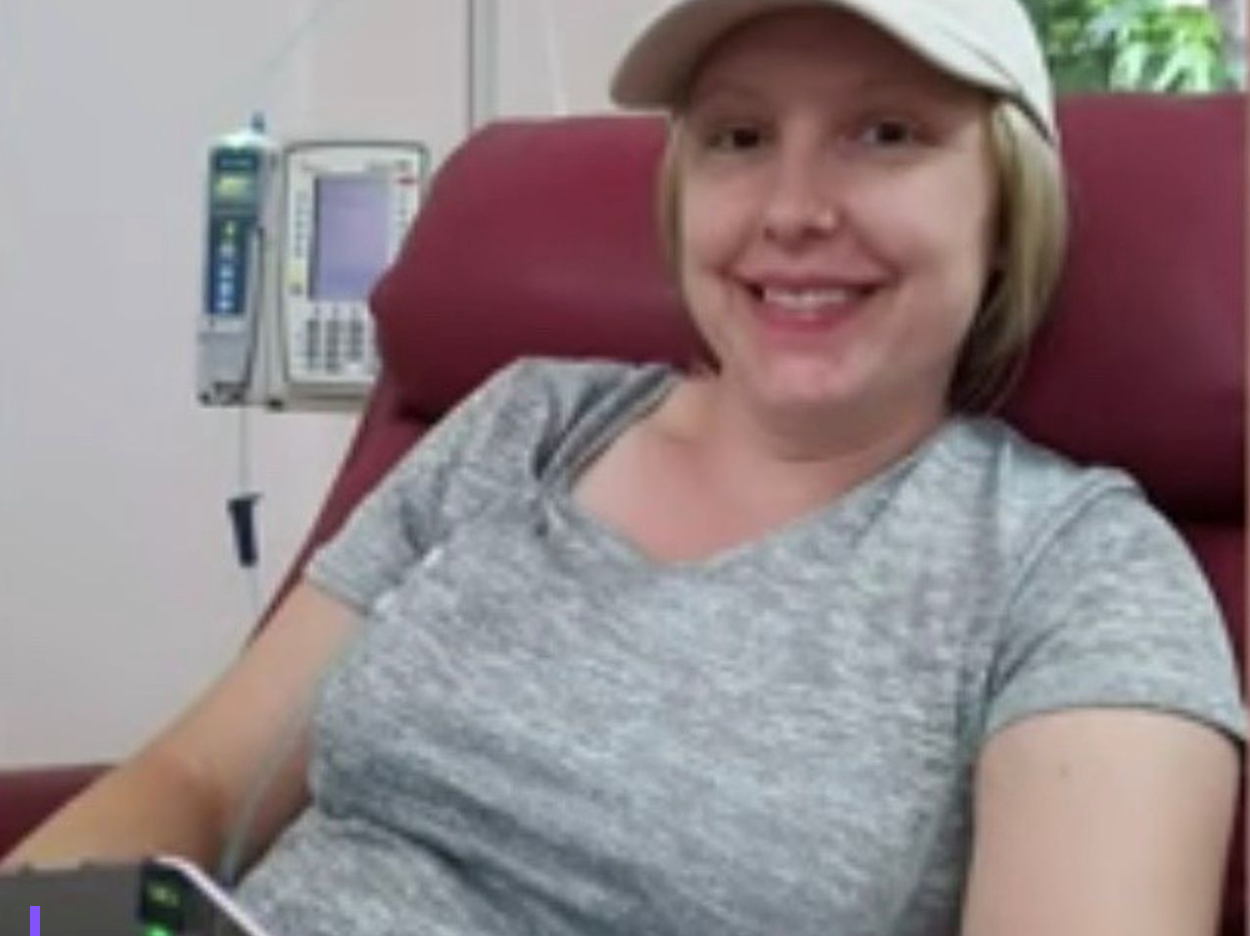 "I knew that once I'd completed my family the plan was to have a double mastectomy and have my ovaries removed," she says matter-of-factly.

Braude remembers her mind swimming with thoughts after her first doctor's appointment. Her life was in Singapore, with her possessions, and she was now facing countless doctors and hospital visits to treat her illness.

"My husband was due to go back to work on the Monday, and actually my mum was coming back with us for a week to see where we were living. It was very unexpected," she says.

"I was very overwhelmed at that point, not knowing what to do. [The doctor] said I needed a double mastectomy and to do radiation and I was like 'okay, whatever you say, I've no idea'.

"And at the end of the appointment, he actually said to me, 'Here's your biopsy results, feel free to get a second opinion'."

Braude says after the doctor's appointment, she sat down with her husband and parents for lunch. Numb to the news, her parents urged her to seek out another doctor.

"I was like, 'I don't really want a second opinion, I just want to get this over with so I can just go back and live my life'," she says.

However, after careful thought, a few days later Braude meet with a different doctor, a surgeon, who offered her a completely different approach.

The new path forward for Braude would mean also completely changing her plan for having children.

"She basically said to me, 'Look, the cancer that you have is what's known as triple negative breast cancer, it's the most aggressive, and I think you need to have chemotherapy', which is obviously not what the first doctor had said," she says. 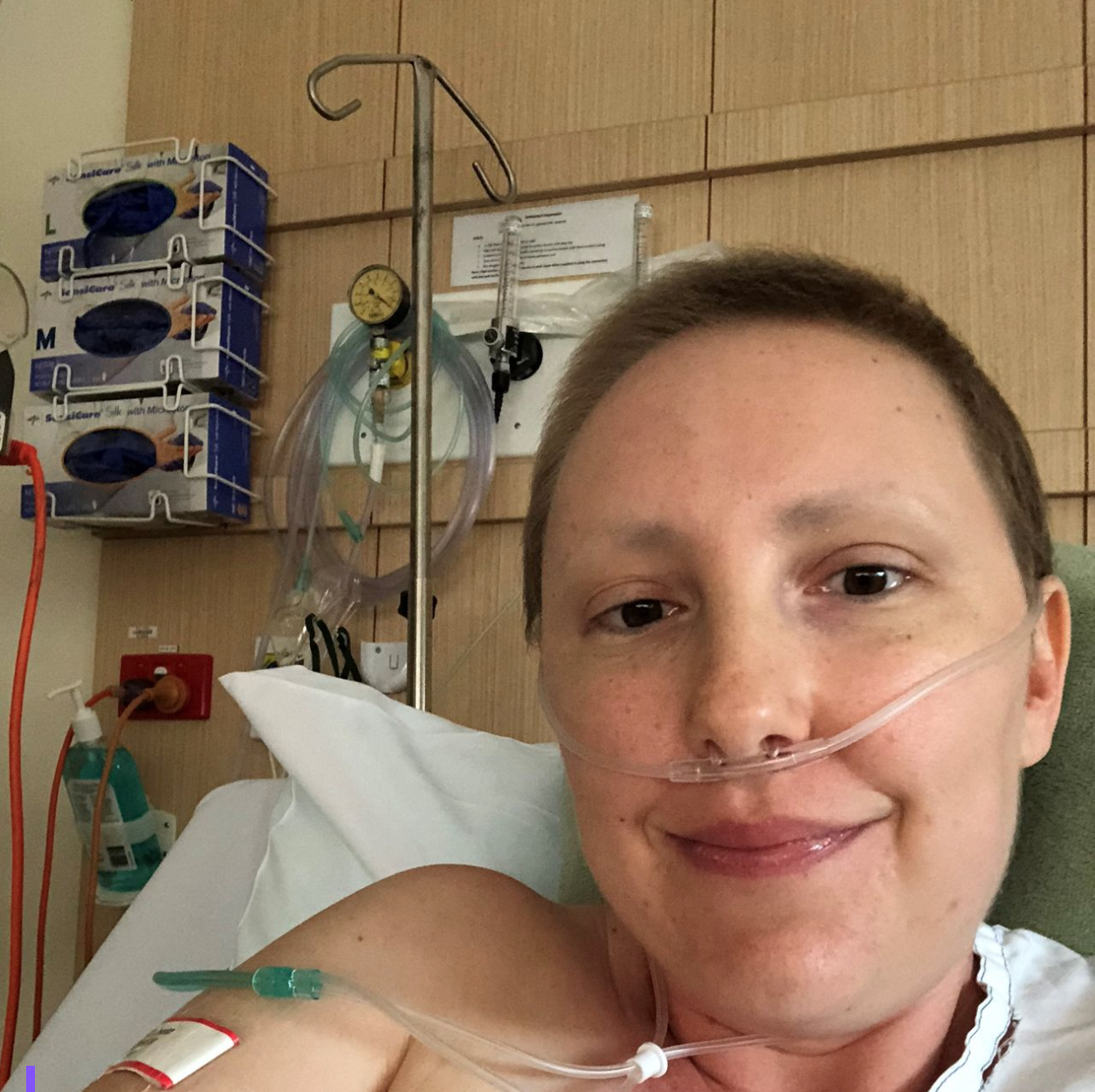 "Instantly I just felt like she knew what she was doing. I felt much more comfortable with her. So, her approach was different. I booked in with her to have a lumpectomy first because I needed then to do IVF because I hadn't had children and the chemo was going to destroy my ovaries.

"So very quickly I booked in for the lumpectomy, did a round of IVF and then started chemotherapy."

In less than two weeks, Braude had gone from living independently overseas to moving back in with her parents.

"My poor husband had to go back to Singapore and basically pack up our life and ship it all back, which was pretty awful… And he got to move back in with my parents as well," she says.

As for how she coped with such upheaval, Braude says she had no choice.

"You just go on autopilot... I think one of my cousins said to me you either sink or swim," she says.

"The baby I am now carrying definitely does not have the BRCA gene, which is the best news ever"

"But your life is a shemozzle. It's thrown up into the air and you've just got to go with it."

In July it will be four years since Braude's diagnosis. She's doing well and is even due to give birth to her and her husband's first child next month.

Becoming a mum will be an emotional, yet special, moment for her. It will also mark the start of a new generation for the family without the BRCA gene.

She says four of the 12 embryos do not have the gene, meaning it has been screened out.

"They cannot pass it on. So, we've stopped the flow of this horrible thing. So that's the silver lining. If me having cancer means no one else in my family has to have it then it's worth it," she says. 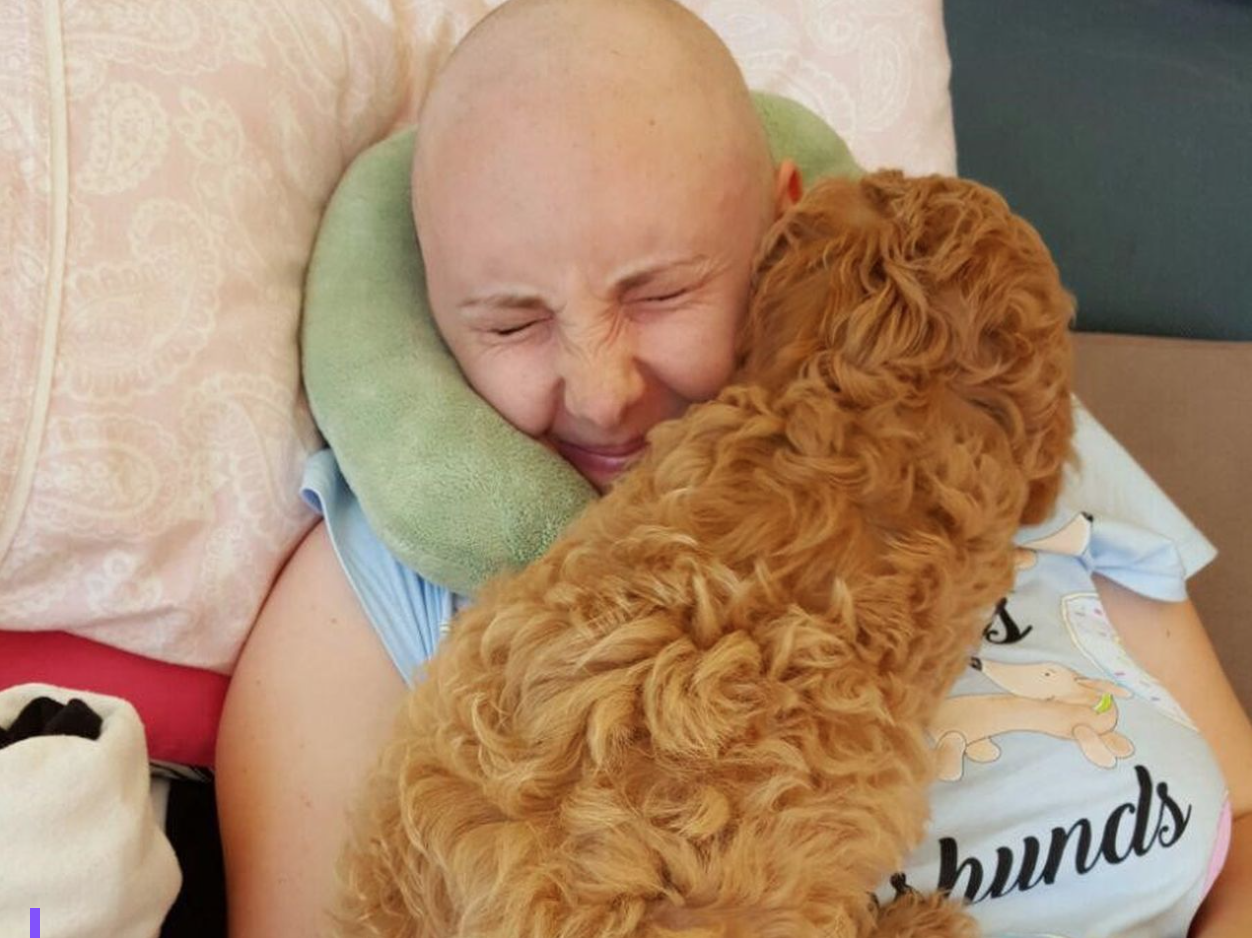 The couple did two rounds of IVF and had around 12 embryos. She says it was a solid backup plan.

"I wasn't too worried about not being able to have kids," she says.

"But I know at the beginning, when we were talking about a double mastectomy I was really worried about not being able to breastfeed."

Braude, who has been so candid and open during the interview, shifts in her chair. Talking about breastfeeding is a sensitive topic for her.

"I spoke to a few doctors about that and they were so reassuring. They said, 'Your health has to come first', like, 'You won't be a mum at all if you don't do this surgery' and, 'Breast feeding is irrelevant, you need to be there for your child and if that means you can't breast feed, then so what?'" she says.

"They really, I guess, destigmatised the whole thing for me because I was wanting to breastfeed and then have the surgery. So, the fact that was taken away from me in a way was quite difficult."

Braude says the crucial part about IVF was the genetic testing on the embryos.

"The baby I am now carrying definitely does not have the BRCA gene, which is the best news ever," she says, her face beaming.

As for her sister, Braude says a few years ago she had a preventative double mastectomy and, five months ago, welcomed a "BRCA-free little girl".

"I'm due on May 12, so there is a very high possibility it may come on Mother's Day or very close to it," she says.

Braude nor her husband know the sex of the baby — they're happily keeping it a surprise.

"So, maybe COVID is a blessing in disguise, because I wouldn't want to [give birth] at the [Mother's Day Classic in the] Domain," she says with a laugh. 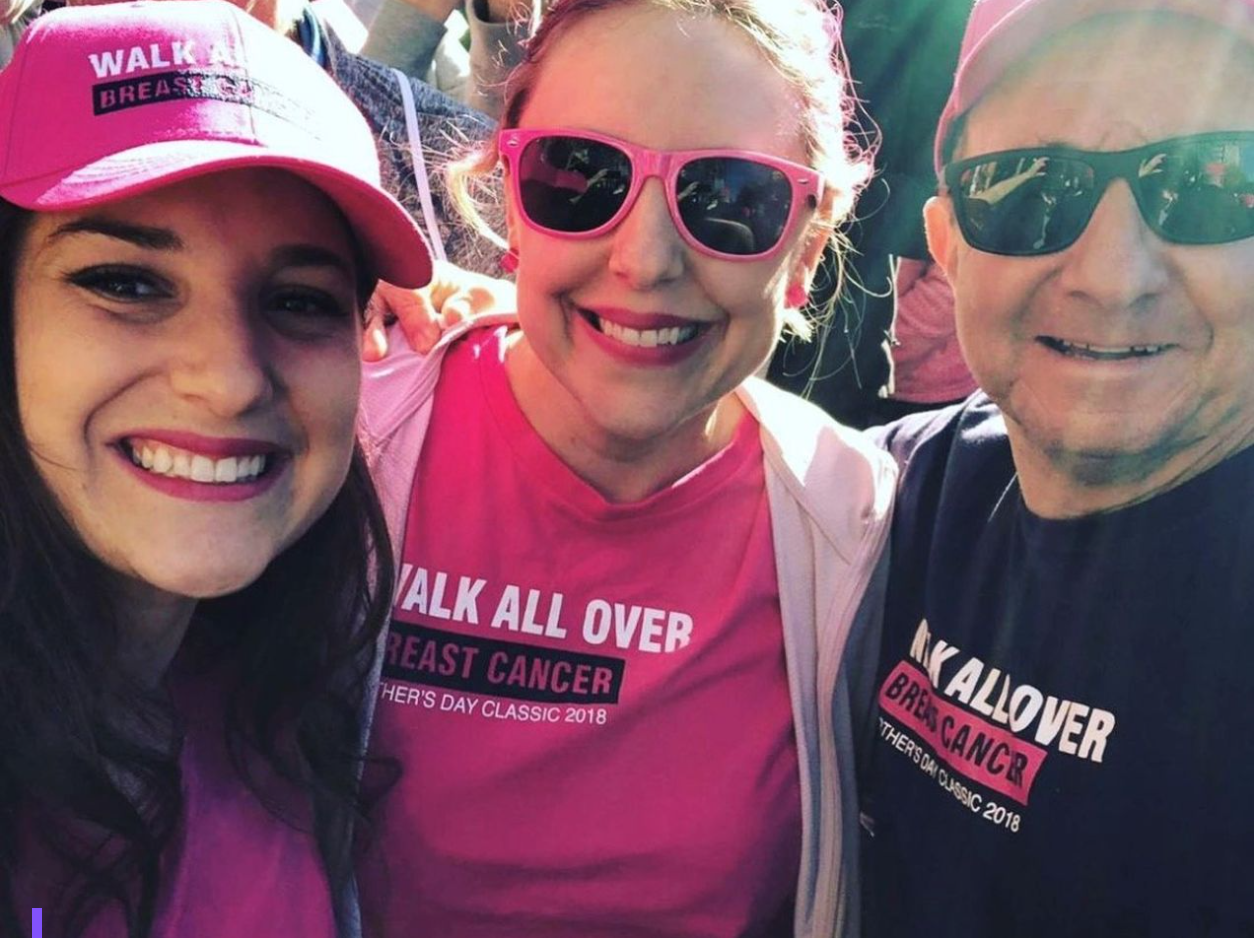 "It's honestly my favourite day of the year because there are just so many people coming together. Everybody's lives are touched by somebody who has had cancer, probably breast cancer.

"Unfortunately, COVID has put a little dampener on that but still an opportunity to raise much needed funds and walk in your local area.

"But, for me, it's just about raising awareness and raising funds. Because for me, with my type of cancer, there's still not a lot of treatment options, so research into this area is so important."

Thanks to Nine Honey for publishing and Kate Kachor for writing Jess's story. For more from Nine Honey visit: https://honey.nine.com.au/