Mum with no family history of cancer has five surgeries in eight months: 'I had no warning signs'

As Karen Lamond lay in silence waiting for her ultrasound, she felt a gentle touch on her shoulder.

It was mid-2019 when the mother-of-two from Port Macquarie, on the NSW north coast, booked in to see her GP to chat about a dull ache on her right side. It had bothered her for about a month.

She had put the ache down to having young children, two "knock-about boys" then under the age of 10, yet, her doctor suggested a mammogram and ultrasound. The results were a concern.

"During the mammogram, the radiographer said to me that she wanted to go and grab the doctor to just double check something," Karen tells 9Honey. 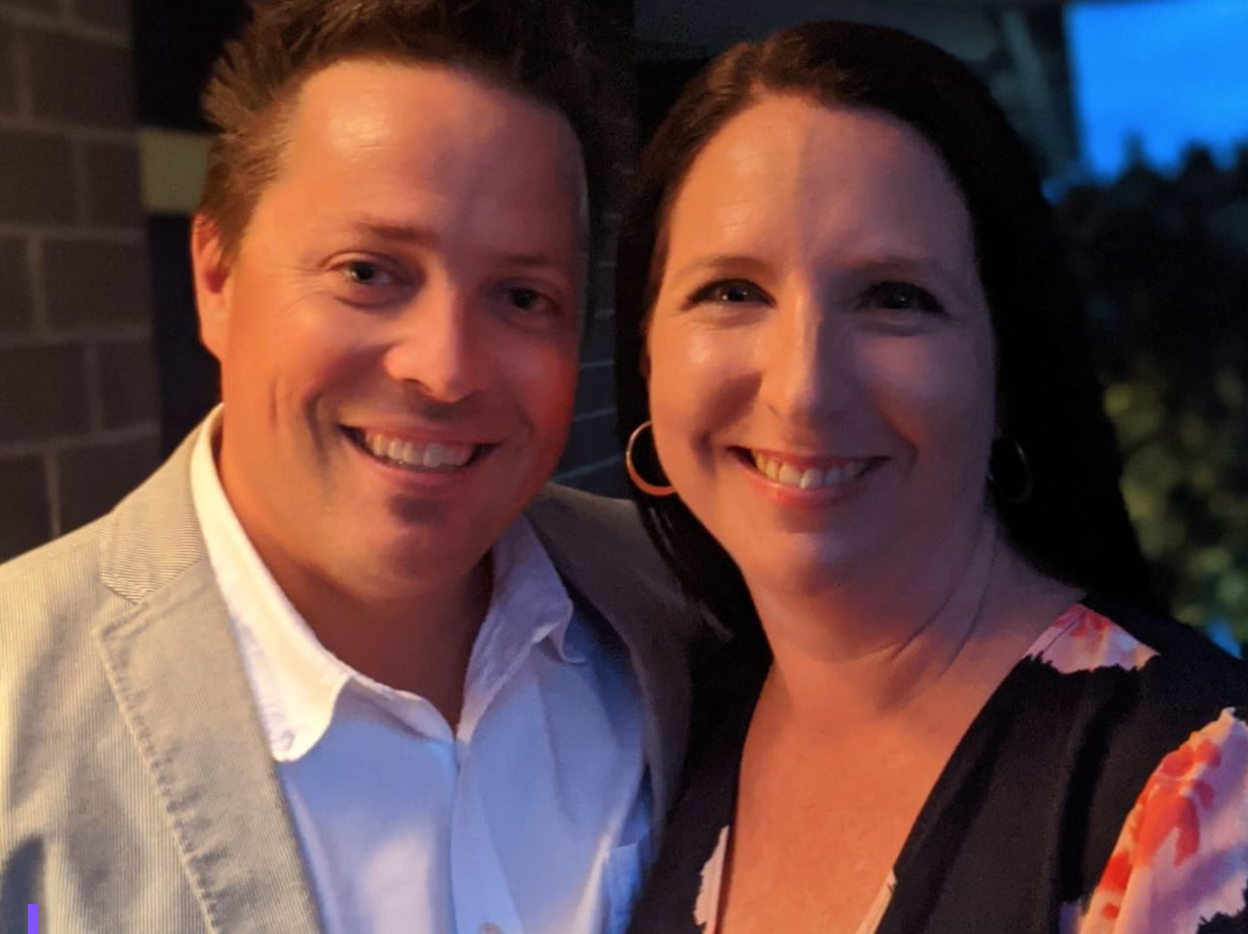 Karen Lamond with her husband. (Supplied)

"So, I kind of knew then that something wasn't right."

It was at this point the then 40-year-old recalls experiencing a sinking feeling. The mammogram would reveal her right side, where she experienced the dull pain, to be completely clear. There was something on her left side.

"I guess at the time it was hard to comprehend what was happening," she recalls.

"But, in saying that, it was harder to understand that it was the side that had no symptoms, there was no pain, there was no reason for me to actually be there at that particular time."

Karen, a travel agent, says she never thought about having a mammogram, she felt she was too young.

"I kind of picked myself up, gathered myself together, and walked to school to pick the boys up"

"It came as a complete shock and I remember lying there on the bed waiting for the ultrasound and just thinking 'but that's not the side with the pain, what do you mean? Surely you must have this wrong'", she says.

"The radiograph doing the ultrasound was just touching my shoulder, just going 'you know, sometimes unfortunately these things happen'".

After the appointment, Karen phoned her husband. It was not a conversation she wanted to have over the phone, but unfortunately, he was away for work. 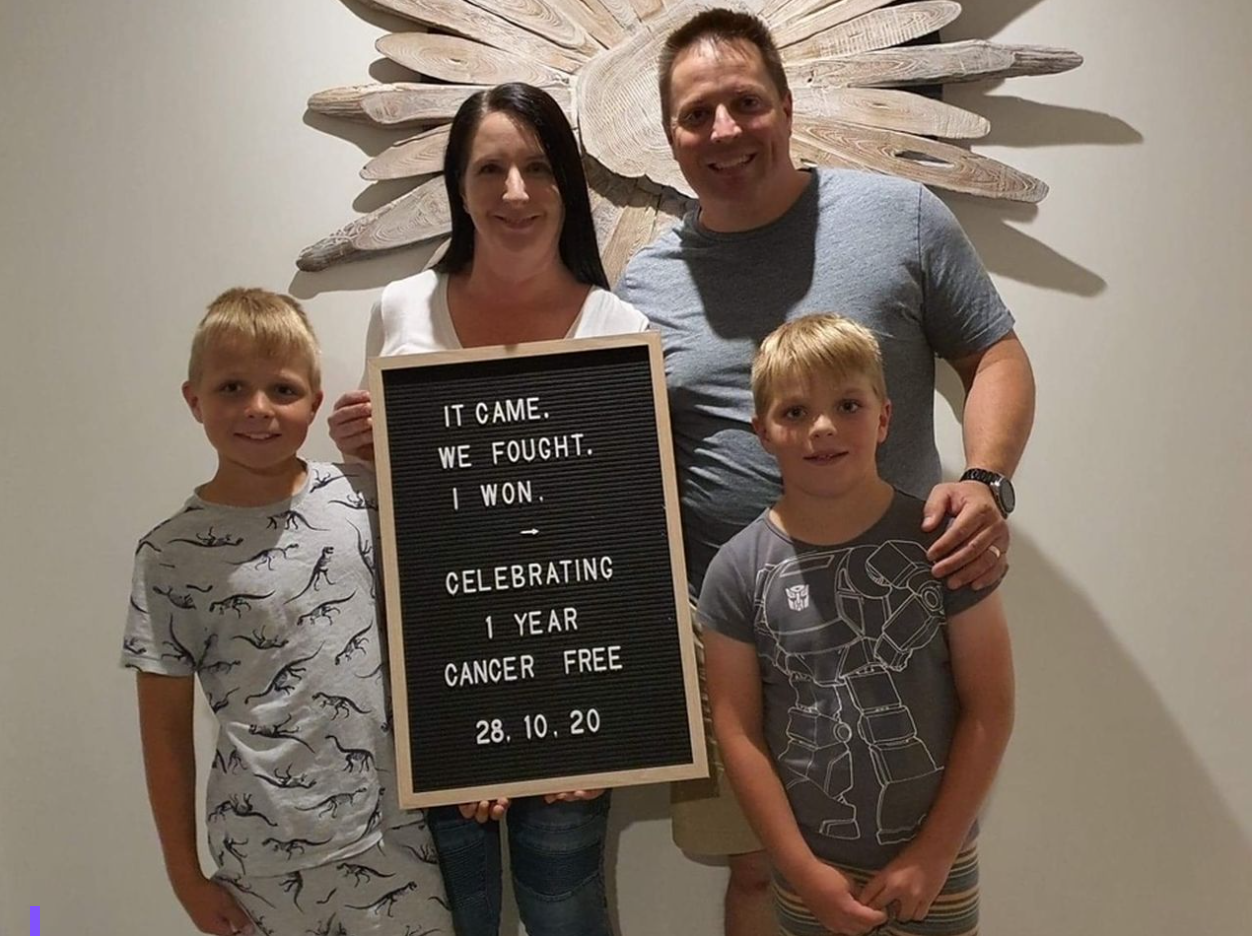 Though shocked by the news, the couple calmed themselves as Karen was yet to have a biopsy.

Unfortunately, when she received her results on 19 June 2019 her husband was again away with work. The results would reveal she had breast cancer.

"I do remember very clearly that afternoon that my kids were at school, and I got the call to say that it was cancer and that it was high grade – so fast growing – and these are the plans that we need to do next," she says.

"I think it was about 2pm and I'd gotten off the phone and I rang my husband because, I thought I need to tell him, he needs to come home. And no sooner had I spoken to him I kind of picked myself up, gathered myself together, and walked to school to pick the boys up.

"You don't think that it's going to happen to you, I have no family history, I had no symptoms, I had no warning signs. So, I think I was sitting there going 'but I just don't get it'."

"I just thought 'far out I'm 40, I need to do what is going to keep me here for my kids the longest"

She says she felt compelled to keep her composure for her children.

"I didn't want the boys to know there was something wrong. They were little, they were eight and six at the time," she says.

"I wanted to shelter them as much as I could. I didn't share the news with them for about three to four weeks because I just didn't know how to tell them."

When Karen was diagnosed, her tumour was just under 1cm - considered relatively small. By the time she had her first surgery, some five weeks after diagnosis, it was three times that size. 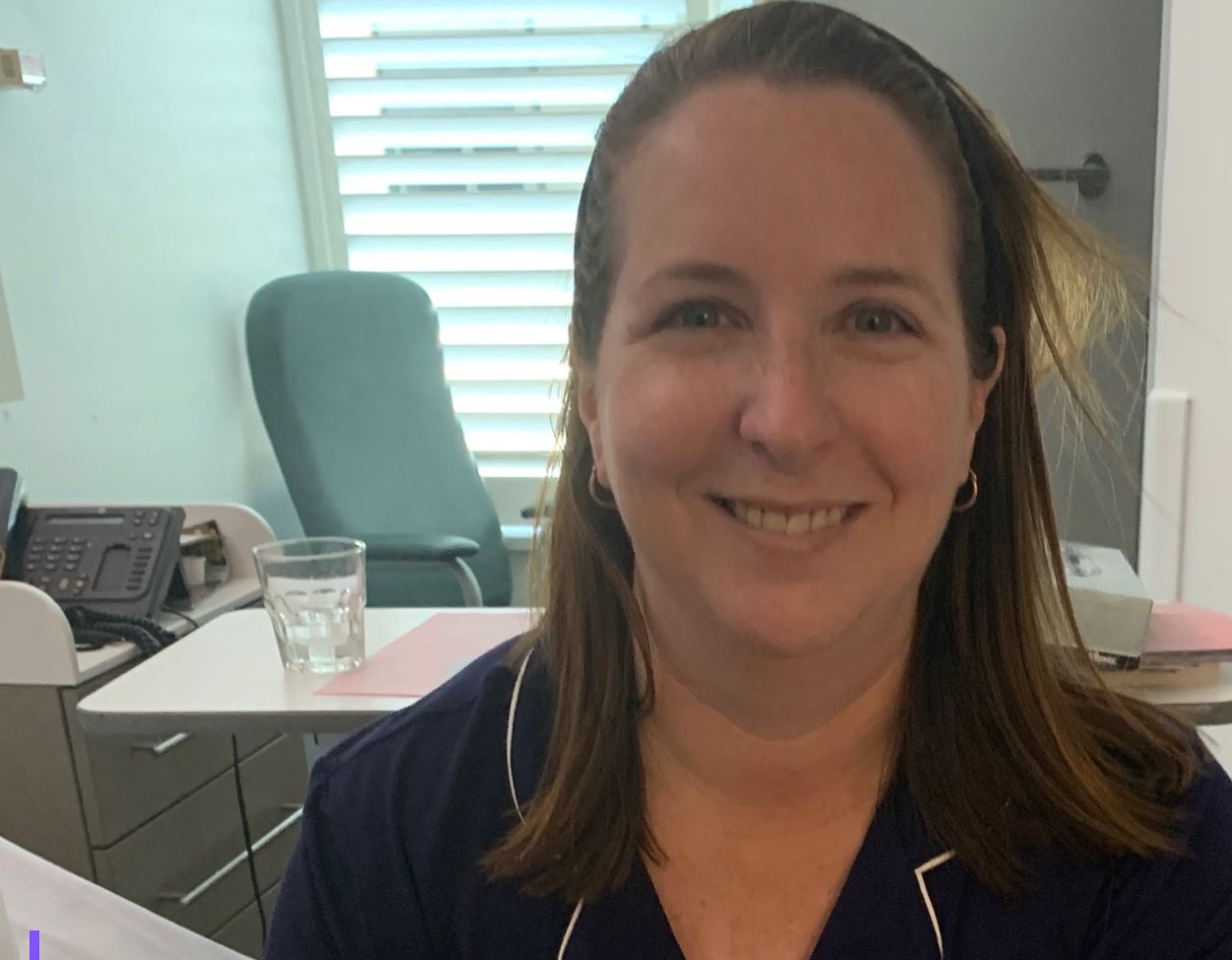 Her surgery had been delayed after she developed a large hematoma – a common complaint where larger blood vessels in the body become damaged. Out of caution, her surgeon chose not to operate.

"It took about three weeks to get to a stage where the surgeon and I were comfortable for it to be operated on. So, I had that and then my margins weren't great," she says.

A margin is the edge or border of a tissue removed during cancer surgery.

The margin is deemed negative when no cancer sells are detected at the tissue's edge, indicating all cancerous tissue has been removed.

She decided to speak with a specialist in Sydney for another opinion.

"I wanted to make sure I had exhausted all avenues possible. I just thought 'far out I'm 40, I need to do what is going to keep me here for my kids the longest'," she says.

"And that was in the back of my mind making every decision throughout the whole, what's been, almost two years now."

After weighing up her options, Karen ended up having a double mastectomy.

She had her first surgery in Port Macquarie and then other surgeries in Sydney. In total, she had five surgeries in the space of just eight months. 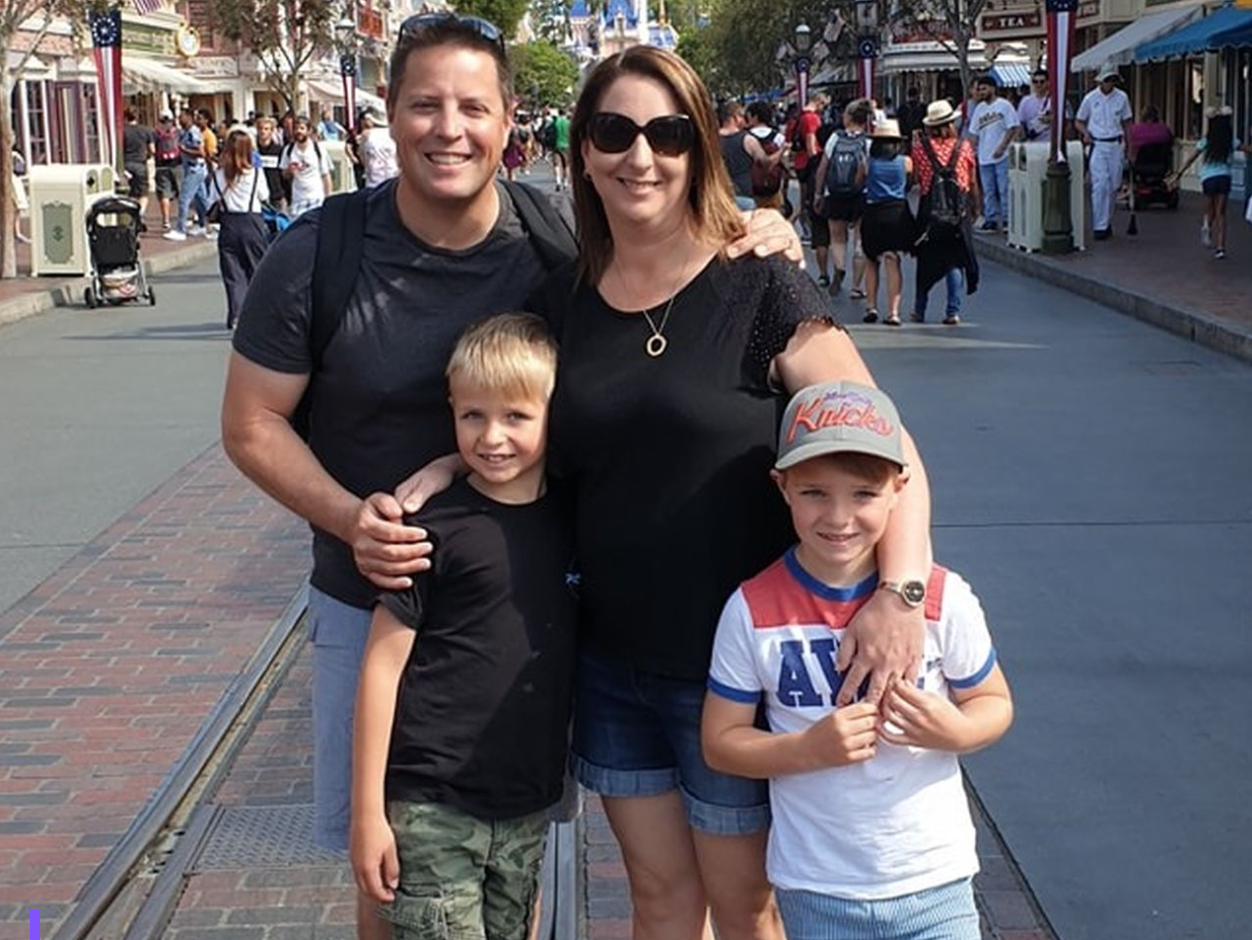 The Lamond family during their Disneyland holiday. (Supplied)

It was an overwhelming and somewhat lonely time in Karen's life particularly with the onset of the coronavirus pandemic, and its restrictions with visitors in hospitals.

"I was doing pretty much a 10-hour round trip to see my specialist in Sydney because I didn't want to stay down there. I just needed to get in and out of my appointment," she says.

"I would go on my own because I couldn't have a support person with me so it was a little bit crazy. It was really tough, and I think sometimes it's just nice to have someone hold your hand.

"You never know what news you're going to get and although the majority of the time it was completely fine, it's still in the back of your mind, when you walk through the doors of what's about to happen."

She says her decision to travel to Sydney for treatment was so she could have reconstructive surgery, something not offered in her small town.

"It was my decision in the end. We basically put it all out on the table, looked at every option," she says.

"It was a very, very tough decision to choose to go down the path of a double mastectomy at 40. There are so many things that go through your mind and a lot of, in hindsight, probably silly things of well you know 'who's going to love me for the way that I look'," she says.

"And, they're irrelevant things, but at the time, you can't help but think about those things and it's something to live with everyday. I have to look at the scars everyday."

When it's suggested Karen has shown great strength in being forced to make a number of difficult decision in such a short amount of time. She doesn't skip a beat with her humble reply.

"I think when you have small children you just have to be. You have to put on that brave face even though you might feel like you're falling apart on the inside," she says.

"I am very grateful and lucky that I did find it early and that in the end it was my decision to have the double mastectomy and I could choose my reconstruction path and do what was right for myself and my family. 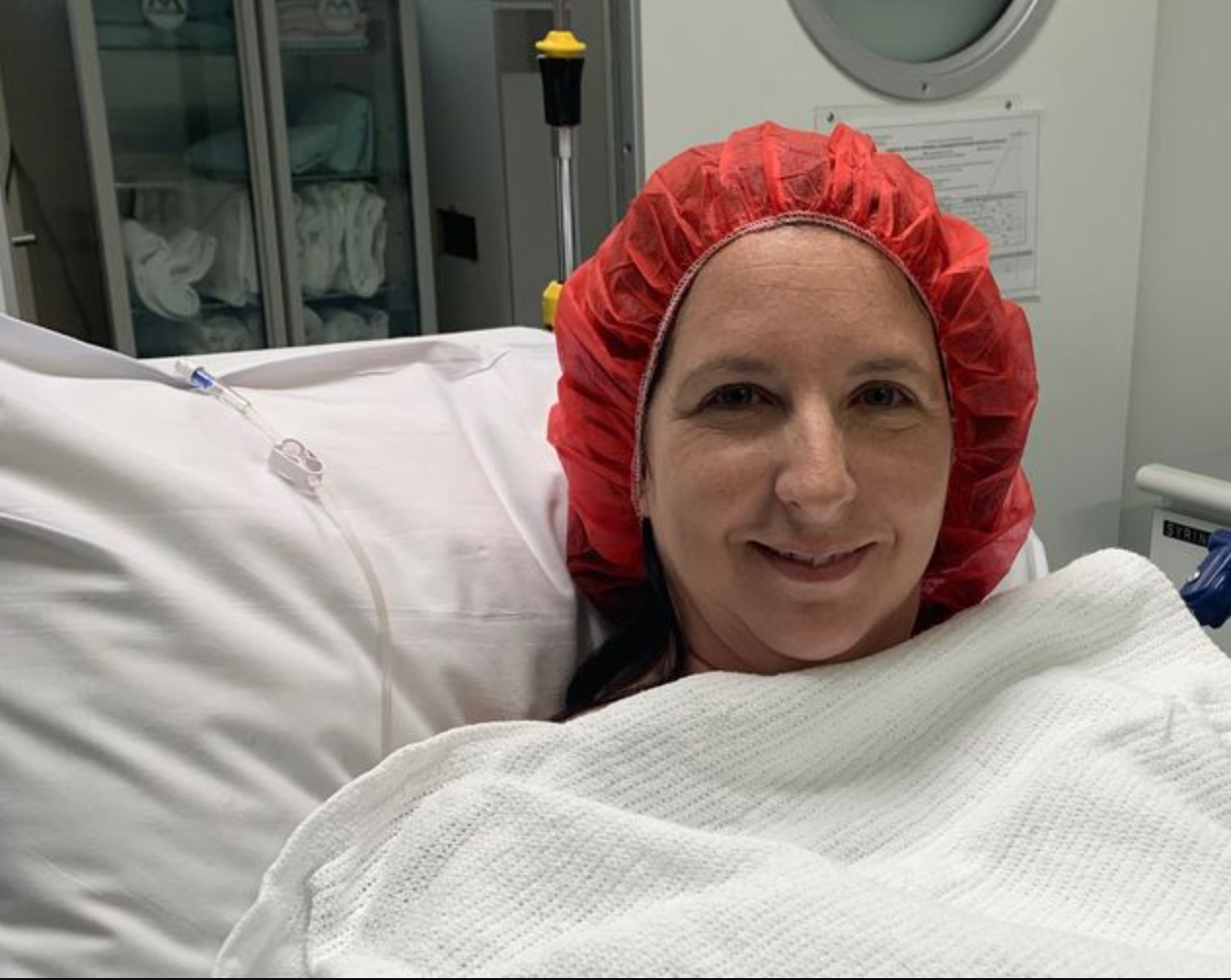 "I guess it's almost a control thing when you get told you have cancer you feel like you have lost all control of everything and to be able to reclaim some of that gives you an amazing sense of, I guess, it is control back. That you can make your own choice."

This month, Karen is preparing to participate in her local Mother's Day Classic event.

She first heard about the event through social media and had planned to attend last year, however, it was cancelled due to COVID.

"It was a goal for me to attend but in hindsight I think it was probably better that I didn't particulate that year. So, this year, it is really important to me to get behind such a great cause," she says.

"There are so many families that are affected by what I class as such an awful disease."

She says one of the biggest lessons having cancer has taught her anything, it's not to put off a medical checkup.

"I hear so many stories out there about putting having put it off and their outcome is terrifying. So, just make the time to make the appointment," she says.

"And I think that's with anything medical not just something like breast cancer...I guess, we're all so busy, but in reality you need to make time because you don't want to deal with the alternative potentially not being around to see your family grow."

Thanks to Nine Honey for publishing and Kate Kachor for writing Karen's story. For more from Nine Honey visit: https://honey.nine.com.au/